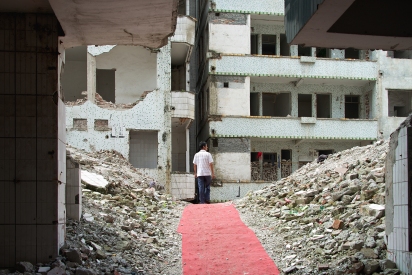 Liron Efrat is a Ph.D student in the department of Art History at the University of Toronto. She graduated in 2010 from the Hebrew University with a BA (honors) in Art History and Comparative Literature; in 2013 graduated with distinction from Hebrew University’s Art and Culture M.A. program. Her master’s thesis explored hybrids of art and pornography in contemporary photography. Her current research focuses on artistic hybrids that employ AR technologies to examine the role technology plays in diminishing the division between art and reality.

Jonathan Finn is Associate Professor and Chair of Communication Studies at Wilfrid Laurier University. He is the author of Visual Communication: Images in Action (Oxford 2012) and Capturing the Criminal Image: From Mug Shot to Surveillance Society (Minnesota 2009) as well as numerous essays on photography, visual evidence, surveillance and sport. His current research project is a critical examination of the photo finish in sport.

Mark Hayward is an Associate Professor in the Department of Communication Studies at York University. He has published essays in Cultural Studies, Communication, Culture & Critique, SubStance, and New Formations. He is also the co-editor of the collection Communication and Economy: History, Value and Agency. He is current research interest is the encounter between mechanics and early media theory, focusing on the movement of ideas between engineering, philosophy and sociology. He is also completing a manuscript on the history of communication media in banking that looks at how radios, television screens and phones fundamentally transformed how individuals live with capitalism over the course of the twentieth century.

Marla Hlady draws, makes sculpture, works with sites and sounds and sometimes makes video. Hlady’s kinetic sculptures and sound pieces often consist of common objects (such as teapots, cocktail mixers, floors) that are expanded and animated to reveal unexpected sonic and poetic properties often using a system-based approach to composition. She has shown widely in solo and group shows. Hlady teaches in the Studio Program of Arts Culture and Media Department (UTSC) and in the Graduate Faculty in Visual Studies in Daniels Faculty of Architecture, Landscape and Design (University of Toronto). http://www.marlahlady.com

Patrick Keilty is Assistant Professor in the Faculty of Information and Instructor in the Bonham Centre for Sexual Diversity Studies at the University of Toronto. Professor Keilty works at the intersection of digital studies, technology studies, and information studies, with a particular focus on visual culture, pornography, databases, critical theory, and theories of race, gender, and sexuality.

Tong Lam is a historian at the University of Toronto and a visual artist. He uses photographic and cinematographic techniques to engage China’s breakneck development and analyze the debris of history in industrial and post-industrial societies. In addition to making images of urban transformation, social displacement, dispossession, ruins and ruination, he is also interested in exploring the intersection of art and scholarship. He has exhibited his photographic and video works internationally. http://www.tonglam.com

Scott Mitchell is a former newspaper columnist and writer, blogger, and cartoonist with Maclean’s magazine and currently a PhD student in Carleton University’s Communication program. After completing a BSc in Biomedical Sciences and a Master of Science with research in bioinformatics, Scott focused his research interests on the public communication of science and visual culture. His research examines how contagious diseases are visually constructed across news, social, and entertainment media, and how this impacts public health responses.

Sheenagh Pietrobruno is an Associate Professor of Social Communication at Saint Paul University/University of Ottawa and a member of the Faculty of Graduate and Postdoctoral Studies at the University of Ottawa. She has held research fellowships at Goldsmiths/University of London, Linköping University, University of Salzburg and McGill University. Pietrobruno’s books include Salsa and Its Transnational Moves (Rowman and Littlefield, 2006) and Digital Legacies: The Archiving of Intangible Heritage (forthcoming). Her heritage research includes the following archive: http://www.digital-intangible-heritage-archive.com

Public Studio is the collective art practice of filmmaker Elle Flanders and architect Tamira Sawatzky. Since 2009, Public Studio has employed a diverse range of media resulting in large-scale public art works, films, immersive installations, lens-based works and socially engaged projects. Public Studio was founded with the intent of exploring antagonisms that occur in and around public space and its disappearance; current instabilities; and the effects of globalization on our everyday landscapes.Their multidisciplinary practice has engaged topics such as war and militarization, ecology and urbanization and political dissent. With backgrounds in photography, film and architecture, the point of departure for Public Studio is an image that is often formed and informed spatially. Their photographs and immersive film installations consider the relationship between ethics and aesthetics through landscape. Central to their work is the role of aesthetic judgment and not just how to “make meaning,” but how to “make meaning matter.” http://www.publicstudio.ca

Ilana Shamoon is a curator of contemporary art. She holds a Bachelor’s degree from McGill University in both Art History and Mathematics and completed her Master’s in Art History at the University of Toronto in 2004. After preparing part of Lord Kenneth Thomson’s major donation to the Art Gallery of Ontario, she moved to Paris, France in 2004 and worked alongside Catherine B?dard in the Visual Arts Department of the Canadian Cultural Centre. From 2006 until 2015, she was Curator at the Fondation Cartier pour l’art contemporain, creating numerous solo and group exhibitions and adapting them for institutions abroad. Most notable shows include David Lynch, The Air is on Fire (2007); Native Land: Stop Eject (2008); William Eggleston, Paris (2009); America Latina, 1960-2013 (2013); Beaut? Congo, 1926-2015, Congo Kitoko (2015). She recently returned to Toronto and is currently working as an independent curator.